Imagine clothing that can be easily adjusted and shaped to whatever you prefer it to be. Imagine ease and style combined flawlessly just the way you wished. The only thing is, you don’t have to imagine it anymore, for Anuj Sharma has perfected it all in his exceptional label called Button Masala. 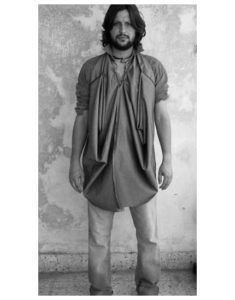 Using a technique that goes by the same name as his label, one that uses buttons, fabric and rubber bands to create apparel, home furnishings and accessories, the NID graduate is all for teaching and spreading the dynamic craft he developed in 2009, for people to learn and use even further.

In a time and age where art is becoming synonymous with exclusivity, the designer conducts workshops all over, from Ahmedabad where he has set up base, to various cities in India and across the world.

In conversation here with Anuj Sharma, the man who has mastered all that is to do with buttons.

It is rare to develop a concept that is so distinct on numerous levels. How did the idea of ‘Button Masala’ come up and how did you go about creating the brand as it stands today?

I always try to make something that will save time. I never really look specifically for inspiration but I do observe. I saw this guy on the street who had buttoned his shirt wrong and I thought if there were more buttons and more button holes then there could be more mistakes. And more mistakes meant a pattern. You see, a mistake is always a mistake but when several people do it, it’s a culture.

I have just focused on the work and teaching the technique. Whatever it has become is by itself. I think teaching it has spread it in its true sense. And I suppose it’s just the beginning!

Is there any one constant, unending source of inspiration?

My constraints. I have always liked to use what I have, rather than dream about or ask for more. My belief is that design is to use whatever you have at hand rather than craving for more, be it more skills, more time, more budget or more luck. Be smart and make most of what you have. 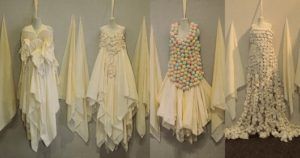 You have been conducting several workshops and tours over the years. Do share some of your experiences derived from them.

During my Button Masala fashion show at Lakmé, I realized that people fear design. They fear doing anything beyond their known abilities and I thought that was a great loss to human society.

I figured it’s not the design that needs a change; it’s the people who must be worked upon.

I found button masala a perfect technique to teach and make people believe in fields beyond their known,  comfortable zones.

I have enjoyed it all the way through. I get to travel and meet people. New places and new learnings. I have taught about 22 thousand people so far.

A workshop done by Anuj Sharma with the button masala technique: Image Source

You also showcased at Heritage 365 in Delhi last year. Do you generally find yourself inclined towards Indian textiles and heritage?

Yes, it’s good to use hand loom and Indian textiles but everything should be smartly used. No point using it just because it’s a good and popular hashtag.

There is so much going on these days with regards to climate change. How important do you think is sustainable design and environment friendliness in these times?

Well, I think we humans can’t destroy nature but we surely can destroy ourselves. We all should be doing our bit, not just in design but in our daily lives too. Most of the time people think that design shall suggest what can be done to make the situation better, but the most crucial person in the chain is the common man.

But then I think humans are not selfish enough to know what’s really good for them.

One of your favorite contemporaries and what you admire most about their body of work?

There are quite a few, mostly people I have taught. I like Rahul’s hard work and continuous effort towards hand loom and Aneeth Arora’s aesthetics and detailing.

Delhi and Mumbai stand out as the two destinations for the majority of designers to establish base, but you seem to prefer Ahmedabad. Is it a conscious decision to escape from the chaos?

A sustainable idea only works when the creator can sustain too. Ahmedabad is the perfect place to live; cheap and wise. It has NID and a great design vibe. The city being economical allowed me to not fear the design market.

Mumbai and Delhi give opportunity to many, but don’t forget they kill many too.

After furniture design and accessories, what’s next for Button Masala?

I think I need to do some collaborative projects and see where that takes button masala from here. 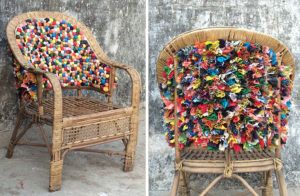 Your favourite decade from the times gone by and one icon you would love to dress up?

I loved the 80’s; a beautiful and peaceful time. People were calm. One tv channel. Enough time to be on street. Life was simpler. The concept of luxury and progress hadn’t hit the masses. If you look at it in a certain way, poverty was good for India.

I can’t think of anyone I would love to dress from then, but I would love to see the women in villages today wearing button masala. Made by them. Made for them. Design democracy Zindabad ! 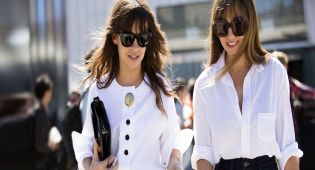 A white shirt is a classic wardrobe staple every woman must own. They are quite versatile, so you ca 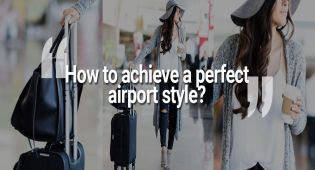 Ask a Stylist : How to achieve a perfect airport style?

Gone are those days, when style was not important while traveling. Thanks to the celebrities and the