While there is a whale of a plot-line going on in HBO’s fantasy drama series Game of Thrones, we forget to spot the finest details in them. Costumes play as one of the most important contributor in it. They create the entire impression of the characters in certain scenarios. Costume designer Michele Clapton did an amazing job creating these impressions for us. The incredible journey of each character from the very first season shows through her work. She uses costume as a story telling device. “I love taking inspiration from the story” Clapton said in an interview with Independent. “That leads you in the direction you want to go – you read the script, and you plot the journey. I’m here to show you what the characters want to say about themselves, what messages they give out… sometimes they want to give out those messages and sometimes they don’t. It’s about trying to visually tell the story of what is going on in these people’s lives, and equally what is going on around them.”

Long story in short—we love the clothes as much as we adore all the drama, chaos, and well, dragons.

So, here are our top 10 episodes with the most influential fashionable moments. 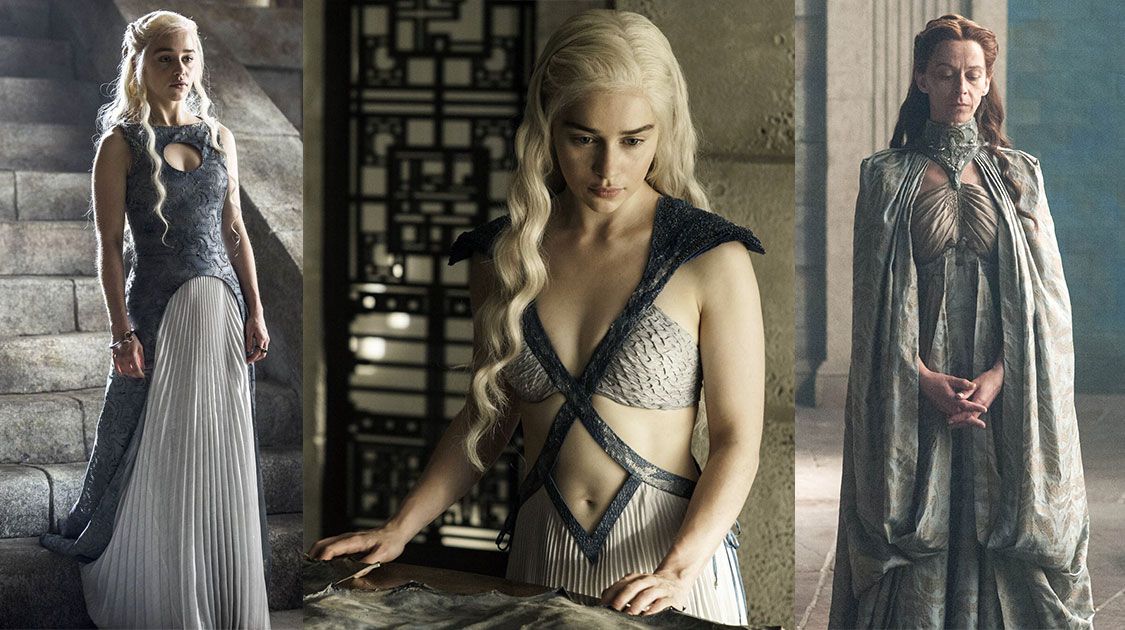 The Mother of Dragons gave all of us some major fashion goals with her sensational outfits till date. All her clothes are somewhat inspired from her children. The scaly finish of the fabrics, those edgy cuts combined with some feminine silhouettes represents her perfectly. We are also in love with the Lysa Arryn’s drapes here. The fish and bird embroidery on the neck represents the houses of Tully and Vale. 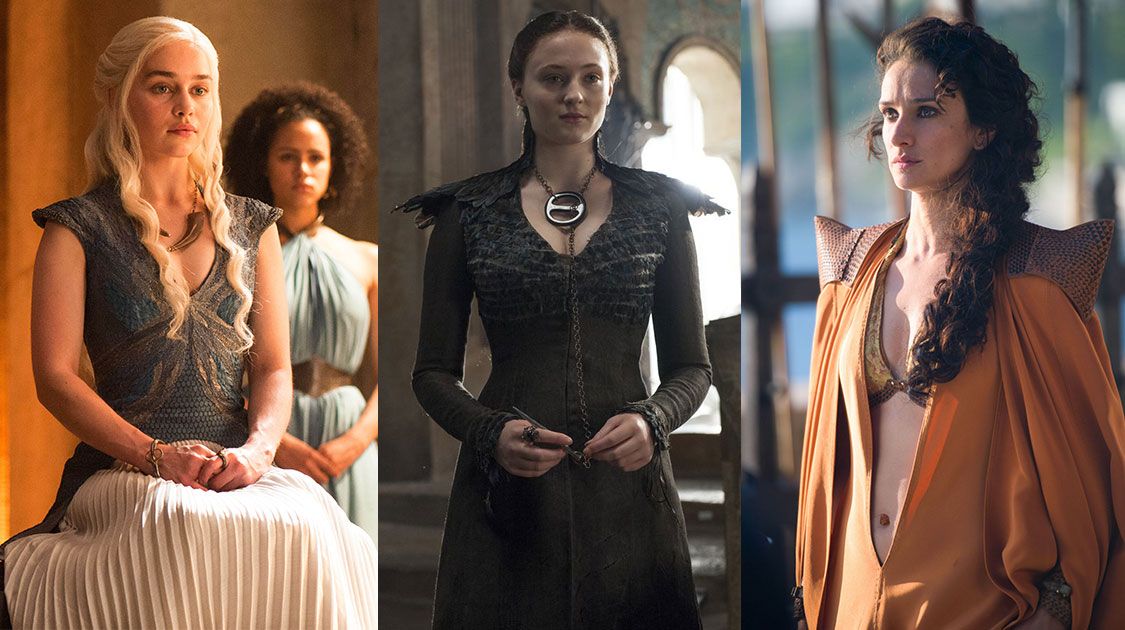 While Daenerys is rocking her dragon inspired clothes, Sansa’s Gothic makeover is quite ravishing. She finally embraces the darker side over her usual innocent nature; and this transformation is visible in her crow feathered dress and black dyed hair. Also, here comes our lady-love Ellaria Sand, with her usual midriff bearing bold outfit. We just can’t take our eyes away from those pointy shoulder patches. So haute couture! Let’s take a moment to admire the new rock star in town—Euron Grejoy! He steps into the Red Keep in a brand new Goth makeover and acts like those cool villain every girl secretly likes. Whereas Cersei has taken some major motivation from her father Tywin Lannister. Her leather over brocade gown is an obvious homage to Tywin’s costume from season 3 episode 1. Also, Danny, the conqueror, looks quite regal with all those dragon scale embroidery on her costume. 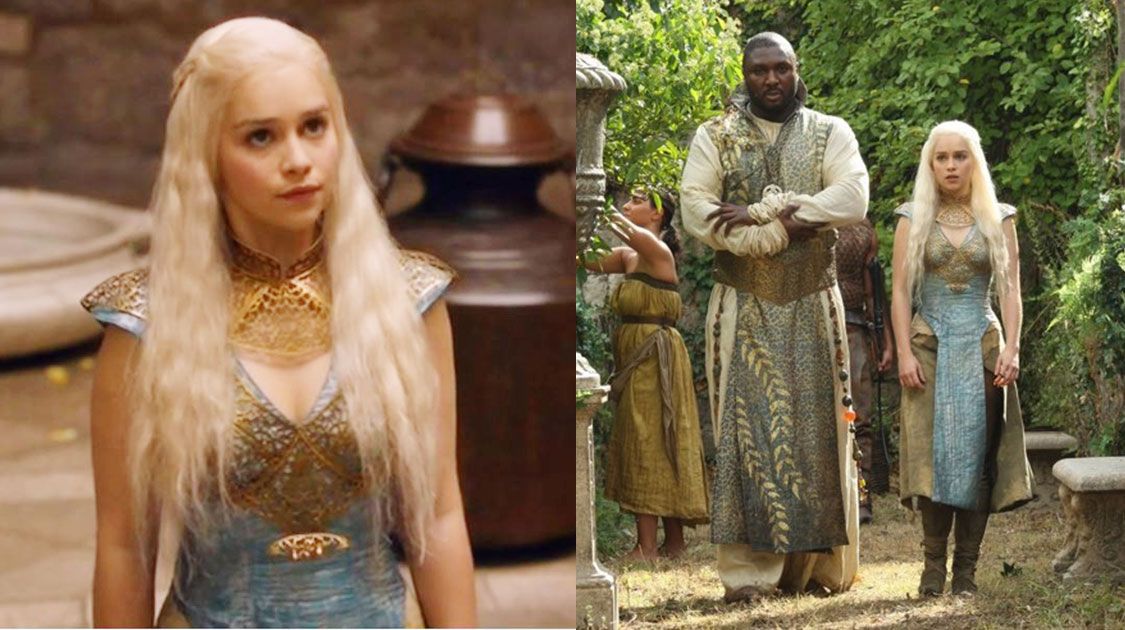 Qarth is like the Fashion Capital of Westeros. We just love how amazingly they can dress up in golden breastplate and waistbands and still look fierce. The beautifully brocaded fabrics can add glamour to any scene. We are obsessing over Cadet Blue after watching this episode. The delicate gold metal work on Danny’s belt and shoulder plate made it one of the most iconic costume of Game of Thrones. Margaery donned Alexander Mcqueen’s Bjork inspired Funnel dress quite gracefully. Also, Xaro looked striking, with his blue and golden brocade jacket. We appreciate that the Sand Snakes took this much effort in dressing up, to see Myrcella off. Though it ended up with her brutal death, but still we didn’t miss to admire those beautiful flowy gowns. The bright colours perfectly represented the warmth of the South. Myrcella’s delicate taffeta gown with brocade bustles harmonised perfectly with her character. Though the wedding made us feel a little sad for Sansa; but we were blown away by the costumes. Sansa’s exquisite gown, backed up with Cersei and Margaery’s lavish drapes were treat to the eyes of every fashion buff. Another royal wedding with the most royal gowns. Ladies! It’s time to take some inspiration. Mergaery’s wedding gown had beautiful intricate detailing of roses turned to thorns. Cersei sported a structured yet glamorous gown, trying to convey, that she still holds the power. And, Ellaria, like always, appeared as a bold beauty with a dangerously low neckline and chained head gear. This episode was a twister when it came to its costumes. We loved the way all the leading female characters’ clothes gave them a sense of power and boldness. We saw a common element in each one’s costume, which is elaborate shoulders and metal embroidery on them.

And the award goes to: Yes; we are all aware, that the wall is destroyed, Cersei has backstabbed almost the entire clan, Starks got their revenge by slicing Littlefinger’s throat open, White Walkers are on their way down south etc. etc. But, let’s admit that, Jonny boy stole the entire limelight from everything else with his picture perfect butt. What an aesthetically pleasing and epic fashionable moment, which didn’t really include any clothing item. Every day is a new fashion day! Own it! We all have been hit hard by ...

BLAST FROM THE PAST 1980s Fashion

The 1980s fashion can be described as big, bright and bold. To be more precise ...

1970's played a significant role in Women’s fashion. The decade did not see new fashion ...