Google, Facebook, Silicon Valley. Call it a typecast but graphic tees and techies are an inseparable duo. Or so we’re told. We decided to test the accuracy of this categorisation, by examining the wardrobe staples of masterminds, from the field of technology.

A renowned perfectionist, Steve Jobs is celebrated for his unique and minimalist approach to design. The co-founder of Apple may have failed at initiating a code of uniform for his employees, but that didn’t stop Jobs from creating one for himself. His signature look consisting of:

came to be as iconic as the man himself. The black turtle neck designed by Issey Miyake, the Japanese designer ended up occupying the main section of Job’s wardrobe for the rest of his life.

A rather plain get-up for someone that extraordinary, don’t you think? 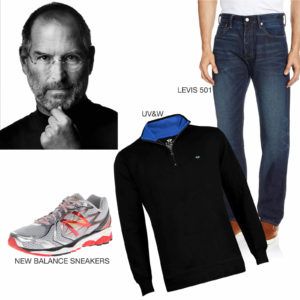 Ever wondered what a billion dollars could do for your closet? For someone with an apparent net worth of 51.7 billion dollars (according to Forbes) Mark Zuckerberg, has astounded many with his mantra of simple living. His signature look comprises of:

The co-founder of Facebook (the largest social networking website) humbly claimed, “I really want to clear my life so that I have to make as few decisions as possible about anything except how to best serve this community.”

One of the most powerful people in the world. Steve Jobs the brains behind Microsoft, is probably the most fashionable guy in Silicon Valley. The signature calling card of the tycoon:

Sweaters in a hundred colours. That’s all it takes to start strike an iconic image for a man of his stature. 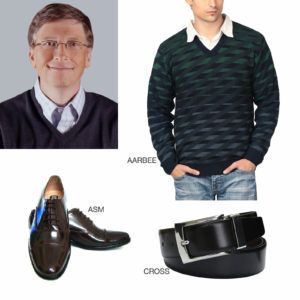 Industrial engineer, developer, American business executive, that about sums up the profile of the man heralding the most valued company in world. Tim Cook, the present CEO of Apple is known to have sparked the Apple Dad look comprising of:

From Irish actor Colin Farrell sporting a rolled-up shirt and denim look to The Good Morning America studio to Prince William and Harry sporting a similar look at the Commonwealth Games of 2014, this look boasts far reaching influence.

And we thought standing out took a lot!

A leading business woman with a no-nonsense approach to dressing. Sheryl Sandberg the chief operating officer of Facebook is what we’d like to call a naturally fashionable woman. Photographed mostly in:

Her style can be summed up as youthful, relaxed and energetic although she refuses to focus on the nitty-gritty of fashion.

From what we see, she’s already nailed it! 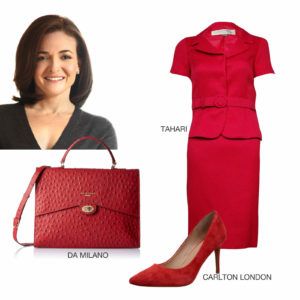 Dress for the job you want, goes the popular adage. These tech giants show us that when it comes to great responsibilities, a minimal, crisp ensemble can go a long way!

Get the perfect professional wardrobe with expert styling advice on elanstreet.

Lucky Stars: Coloured Outfits According To Your Zodiac Sign

Ever checked out your wardrobe carefully? Do you notice a certain affinity for particular shades of

Sartorial Value: How to Enhance the Life of your Clothes

How people perceive you is often influenced by your appearance. Looks aren’t everything, but dress

Techno Times: Our Gadget Wishlist for 2016

Bizarre Trends: What Not To Wear In 2016

Times flies and this year just went by in a snap. From political reforms (or ...

What’s in for fashion and beauty after lockdown?

While we all have related fashion with a fast and changing world but who knew ...

Lockdown has changed everyone’s life. Starting from losing jobs one after another to breaking down ...