Royals, with their distinct stature and inherent sense of style, have always been the subject of interest among the masses. All over the world, their attire is scrutinized, jewellery admired and body language studied,  to gain information about their lives and personality. Royal weddings and ceremonies are often the talk of the town, especially with the rapid rise of publications and social media. Long before the well renowned and stylish princesses of Europe made their mark on the global map, there were their Indian counterparts, taking leaps in the world of fashion. They could easily be labelled as the original trendsetters, women of substance, who were not afraid to express themselves through fashion. Media and paparazzi today give us a deep insight into the lifestyle of modern royals but back in the day, Indian princesses and queens were just as famous and sought after. 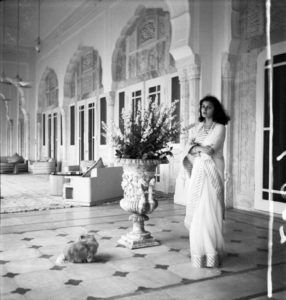 Photographed by Cecil Beaton in 1943

Perhaps the most widely acclaimed and famous of royals, Maharani Gayatri Devi’s charm was such that Vogue once named her one of the top 10 beautiful women in the world. The international circuits loved her for her irreplaceable style and grace, her popularity in the West rising remarkably after being photographed by Cecil Beaton in 1943. As she stands draped in one of her trademark chiffon sarees in the photograph, looking windswept and staring into the distance, it is clear why she continues to be iconic even today. 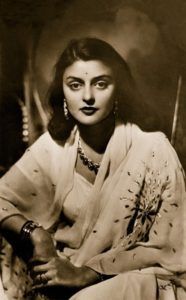 A photograph after her wedding to Maharaja Sawai Man Singh

The Maharani of Jaipur’s death at the age of 90, was covered and reported by media giants like BBC and New York Times. Quite understandable, since she wasn’t just another socialite; an avid rider and lover of Polo, she would be delving into dying arts or social causes when not indulging in sports of her choice. Besides strongly rejecting the purdah system and reviving the art of blue pottery, she initiated the ‘Maharani Gayatri Devi Girls School’ in Jaipur. 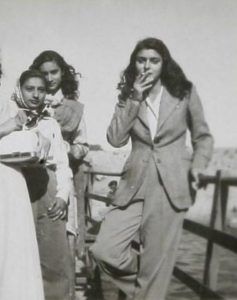 Western attires were a familiar territory

Though most still remember her for her penchant for sarees complemented by a string of pearls and jewels, her education abroad and her free spirit had her comfortable and familiar with western ensembles which were not very common in India in those times. Always the evergreen muse, she was Sabyasachi’s inspiration in 2013 for a limited collection of 5 sarees for a coffee table book.

The government may have abolished princely titles in 1971, but the late Maharani was a queen until the very end. 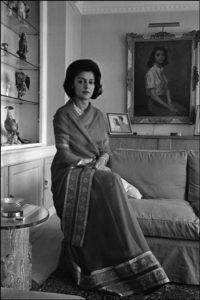 “She was dressed in a turquoise blue chiffon sari with silver sequins sparkling like stars on a moonless night. She looked around with her large almond eyes. Everyone stood up. As Hillaire Belloc once described someone, ‘her face was like the king’s command when all swords are drawn.” 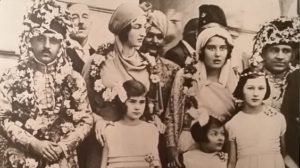 After the double wedding, seen here with cousin Durru Shehvar and their respective husbands

She was born in the family of Ottoman Caliphate in Istanbul when the empire was already crumbling. When Niloufer Khanum Sultana Farhat was 8 years old, the family moved to France in exile, as did many other last remnants of royalty. 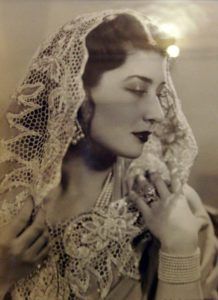 She moved to Hyderabad in 1931 upon her marriage to Prince Moazzam Jah who was the second son of the last ruling Nizam of Hyderabad. Her first cousin Princess Ayse Durru Shehvar Sultan was married to the Prince’s elder brother in the same ceremony.

The princess dressed in sarees but her stay in France definitely affected her style; some sarees she wore were designed by Fernande Cecire of France and then embroidered while for others she relied upon Madhav Das of Bombay. There would be classic ornamentation or a hint of brocade along the borders, beads and sequins coming together on chic fabrics of crepe, net or chiffon, customized for the lady now called ‘The Kohinoor of Hyderabad’. The exquisite collection of her sarees was given to Fashion Institute of Technology in New York to study and showcase. 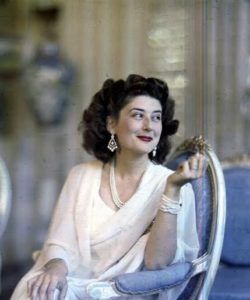 Princess Niloufer in a candid photo

Philanthropy was also close to her heart. Her maid Rafath Unnisa Begum died during childbirth due to lack of resources and proper medication and so in 1953, the Princess helped establish the Niloufer Hospital in Hyderabad so that natives could get the required care. She also trained as a nurse and helped soldiers who were injured during the Second World War. It was all before 1952, before she divorced her husband and moved back to live in France with her family, marrying Edward Pope in 1964. Her final resting place is Bobigny near Paris, where she was buried after her death in 1989.

“The royal banquet hall was full and the guest of honour, a visiting British dignitary, had arrived. Yet all eyes, desi and firangi, at Falaknuma Palace kept turning to the entrance. Everyone was waiting for the “world’s most beautiful woman” to walk in. The cream-coloured Austin rolled in, gleaming in the moonlight. A hush fell on the gathering as she walked up to the host with graceful steps.” 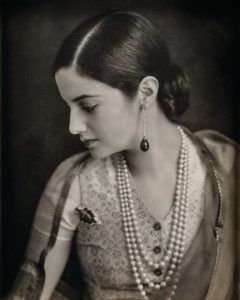 She might have been an Indian princess but Rani Sita Devi, also popularly known as Princess Karam, was fluent in a number of European languages. Photographers Cecil Beaton and Man Ray swore of her beauty, as did several publications which admired her through and through. Vogue depicted her a “Secular Goddess” while Look named her one of the ‘5 dressed women on Earth’. Unsurprisingly, Rani Sita Devi was a muse to famous couturier Elsa Schiaparelli who designed her 1935 collection inspired from her sarees. Such was her popularity in the western media that once Diana Vreeland, the acclaimed editor herself wrote to the royal princess in admiration.

She was undoubtedly an unrivaled style icon in the 1930’s. For her clothing, she relied mostly on famed American couture designer Main Rousseau Bocher, also known as Mainbocher. Laden with jewels which were as distinct as her own personal style, she would be the center of attraction wherever she went. 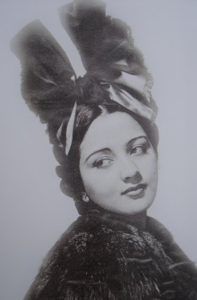 “One of de Wolfe’s last great parties at the Villa Trianon, in the summer of 1939, featured an entourage of elephants and Princess Karam of Kapurthala as the guest of honor; the gathering found its way onto the political page of the New York Times as the setting for a meeting between the French foreign minister and the German ambassador to Paris.” 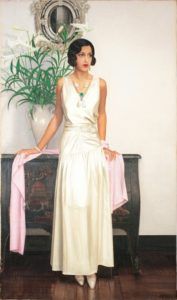 A photo of the Maharani by Bernard Boutet de Monvel, Paris 1931

Not much is available in history about Maharani Sanyogita, perhaps one of the reasons being her demise at the tender age of 23. In a comparatively small time frame, however, the young queen made a lasting impact with her fashion forward stride. 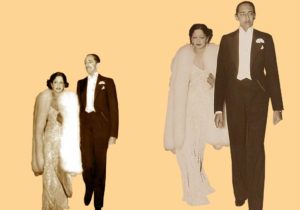 A photograph of the royal couple by Man Ray

Educated in London, she along with her husband Rajeshwar Sawai Shri Yeshwant Rao Holkar, spent most of her time overseas. There would be grand soirees held and the queen would attend numerous couture shows in her impeccable style that included both demure gowns and dainty sarees. Her wardrobe choices included ensembles by Lanvin and Madeleine Vionnet among others. Both the queen and her husband shared a passion for contemporary things, and their trips abroad ensured that it remained fulfilled. In 1930, a state of the art palace was made for the couple in Indore, incorporating works of the best artists and architects like Marcel Breuer, Le Corbusier and Eckart Muthesius. Luxury is one word that comes to mind. 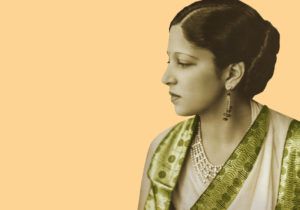 Unlike the western royalty, Indian queens and princesses were not photographed or spotted everyday in the media but their respective sartorial styles didn’t go unnoticed. Even today, several years later, they continue to serve as a source of vivid inspiration, and rightly so. A white shirt is a classic wardrobe staple every woman must own. They are quite versatile, so you ca

The 91st Academy Award was the most anticipated red carpet event this year for Hollywood. ...

With the new year comes new styles which calls for a brand new wardrobe. This ...

Being a man could be hard at times. With the constant struggle of maintaining the ...

3 looks to rock this Valentines

Valentine’s Day is just around the corner, and like always, we are here to play ...

MENSWEAR TRENDS 2018, TO EMBRACE AND TO AVOID